Community Policing Through the Years

Community Policing Through the Years

Community policing is one of the key thrusts of the Singapore Police Force’s (SPF) policing strategy. It helps to build the public’s trust and confidence in the Police and to actively involve the community in combating crime and terrorism. From the inception of the Neighbourhood Police Post (NPP) to the Neighbourhood Police Centre (NPC) and to the current Community Policing System (COPS), these community policing models have changed over the decades to adapt to an ever-changing security environment. Police Life delves into the history of community policing in Singapore and uncovers its pivotal moments.

The local police force was revived after World War II in response to common crimes like looting and robbery. The frontline policing model, otherwise known as traditional policing, was seen to be the most effective way of combating crime in post-war Singapore. Based on the concept of traditional policing, the roles of police officers were limited to the provision of incident response, paying negligible attention towards the role of the community in tackling crime. 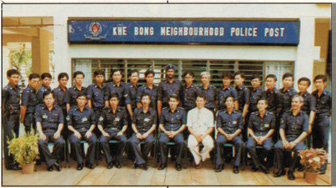 Given the rapid urbanisation and economic development in Singapore during the 1970s, the SPF saw that a change in policing strategy was necessary for the Force to adapt to a new environment and fight crime more effectively. Expectations of the functions of the police rose due to an increasingly better-educated population as well as the proliferation of high-rise public

estates. While mass rioting saw its end during this period, crimes that were related to petty theft and housebreaking continued to thrive.

As a result of the worsening crime situation, the SPF saw a need for a transition to the community policing model, which focussed on developing a strategic partnership with the public, and instilling in them a responsibility to take social ownership of their residential space. This also geared the community to play a pivotal role in crime prevention while building a positive public perception of the SPF as a reliable and friendly Force. 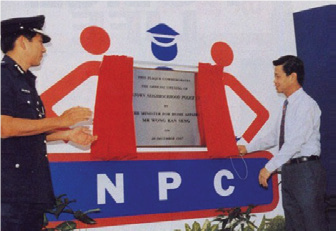 In the late 1970s, then-Prime Minister Lee Kuan Yew tasked the Deputy Prime Minister at the time, Dr Goh Keng Swee, and his team of engineers at the Management Services Department (MSD), to holistically review police operations and recommend changes for the way forward for the Force as a whole. In their report, the team recommended setting up police substations, similar to Japan’s Koban system of police boxes, in every public housing estate. The direction was for the SPF to be more involved with the community that it was serving. Presenting officers with a friendly and reliable image was important for the Police to earn the trust and confidence of the public on whom it could depend on for information and cooperation. This was also in line with the SPF’s change from being a reactive to a proactive Force in deterring crime.

Following the recommendations from the report, then-Minister for Home Affairs Chua Sian Chin and a team of senior police officers visited Japan to further study its civil system in October 1981. Regular visits to Japan were also conducted thereafter to study in more detail the Koban system, a policing model set up in Japan in 1874.

The Koban system, or Kobanjo, refers to a Japanese policing concept in which police officers take turns standing at a fixed spot to project police presence as well as observe the people and their activities at major intersections or important locations within the vicinity. In 1881, police boxes were built at Kobanjo locations and manned by police officers 24 hours a day. Officers would act as first responders to crimes or incidents and were also required to conduct foot or bicycle patrols. They would also build good relationships with the community by conducting door-to-door visits and were regarded as friends, helpers and protectors in their respective areas.

Inspired by the effectiveness of the Koban model after some thorough study, the SPF, eventually piloted the formation of the Neighbourhood Police Posts. With guidance from a team of Japanese experts, the first Neighbourhood Police Post (NPP) Khe Bong NPP was opened on 1 June 1983. It set the tone for the SPF’s policing strategy of being a more proactive and community-based Force. This was done by decentralising police operations from divisional headquarters and focussing on serving at the heart of the community. A total of 91 NPPs in other housing estates were set up in phases between 1983 and 1995.

In the earlier phases, police officers had to undergo a three-day course aimed at changing their image – from cold enforcer to friend and trusted member of the community. This was done by introducing them to the NPP system, and inculcating in them the necessary people skills to manage the public’s expectations while applying a community-oriented approach. The aim was to get the community more involved in safety and security matters through such enhanced engagements between them and the police officers. This also further strengthened the public’s trust and confidence in the SPF. Surveys conducted in 1987 and 1991 revealed that the NPPs had created more meaningful interactions with the public. 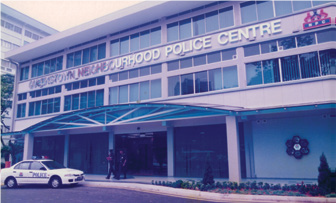 The Neighbourhood Police Centre (NPC) system was introduced in 1997 to address various challenges such as changing demographic, an evolving operational landscape and advances in technology.

The NPC system consisted of six regional headquarters and 32 NPCs. Each NPC served as a one-stop policing centre that aimed to integrate community policing and frontline policing, and brought a wider range of police services close to the community, compared to the NPP. As new towns were built, NPCs were strategically located at places with high human traffic, such as near MRT stations or bus interchanges, positioning themselves in the heart of the community.

The current Community Policing System (COPS) was introduced in 2012 after a review of the NPC system initiated by then-Commissioner of Police Ng Joo Hee. He established a project team to review the operational functions of NPCs, which included interviews and discussions with stakeholders and overseas study visits to other police forces. 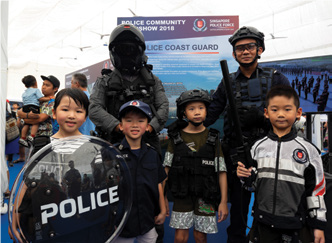 COPS was piloted in May 2012 and rolled out to all NPCs by April 2015. Under COPS, the NPC was restructured to better optimise resource distribution among reactive, proactive and community policing, as well as leveraging technology to support policing. The Community Policing Unit (CPU) was formed as a full-fledged unit responsible for engaging the community and conducting interactive proactive patrols to build closer relations. To augment its frontline policing efforts, Police cameras have since been installed at public places to deter crime and to assist officers in post-incident investigations.

Community-based approach policing has co-opted the community in the fight against crime and strengthened the public’s trust in the Police. From the creation of Neighbourhood Watch Groups to the introduction of the Citizens on Patrols programme and even Safety and Security Watch Groups involving business stakeholders, the SPF has been working ever closely with the community, who has become additional eyes and ears of the Police, playing an active role in fighting crime alongside the Police.

Fighting Crime as One

In 2016, the Community Partnership Department (CPD) was formed to further oversee and strengthen the partnership between the SPF and the community by focussing on the development of community engagement programmes and strategies. Initiatives such as the SGSecure movement and Police Community Roadshow have increased the community’s interactions with police officers as they learn how to play their part in SPF’s crime prevention and counter-terrorism efforts.

The launch of the Volunteer Special Constabulary (VSC) (Community), a volunteer vocation, in 2018 further strengthened the relationship between the SPF and the community. It provides an opportunity for like-minded individuals to join the SPF, and take ownership of Singapore’s safety and security by conducting patrols in high human traffic areas.

The various amendments and initiatives brought by the community policing model reinforces the SPF’s commitment in building trust and strengthening partnerships with the public. By engaging and enabling the community, we all can play our part in keeping Singapore safe and secure!