From love to lies and wrath, we recall how a missing person case grew into a murder mystery in this issue of crime files. Read on to find out how the Singapore Police Force (SPF) work together with the Health Sciences Authority (HSA) to solve the murder using Mitochondrial DNA sequencing for the first time in Singapore without the victim’s body.

Have you seen my colleague?

31-year-old engineer, Miss Cui Yajie, had been absent from work for three days and was also not found at her residence, prompting her colleague to file a missing person report. While examining the rented room where Cui stayed, officers from Clementi Division found it undisturbed, suggesting that she had never returned home. After checking with hospitals and the Immigration and Checkpoints Authority, they concluded that she was neither admitted for medical care nor left the country. The case was then handed over to the Criminal Investigation Department’s (CID) Special Investigation Section (SIS). SIS officers found out from the missing person’s colleague that the victim had a boyfriend called “Leslie” working at a dry-cleaning company. The colleague also recalled that on the last night Cui was seen in the office, she had a heated argument over the phone about money “Leslie” owed her. The colleague also added that when she later realised her co-worker was nowhere to be found, she had called “Leslie” to find out if he knew of her whereabouts. The man had denied any knowledge on Cui’s whereabouts and hesitantly gave Cui’s address to the colleague. SIS officers also interviewed the landlord, who recalled her tenant leaving the house on the morning of 12 July 2016 wearing a dress with prints while arguing with someone on the phone. 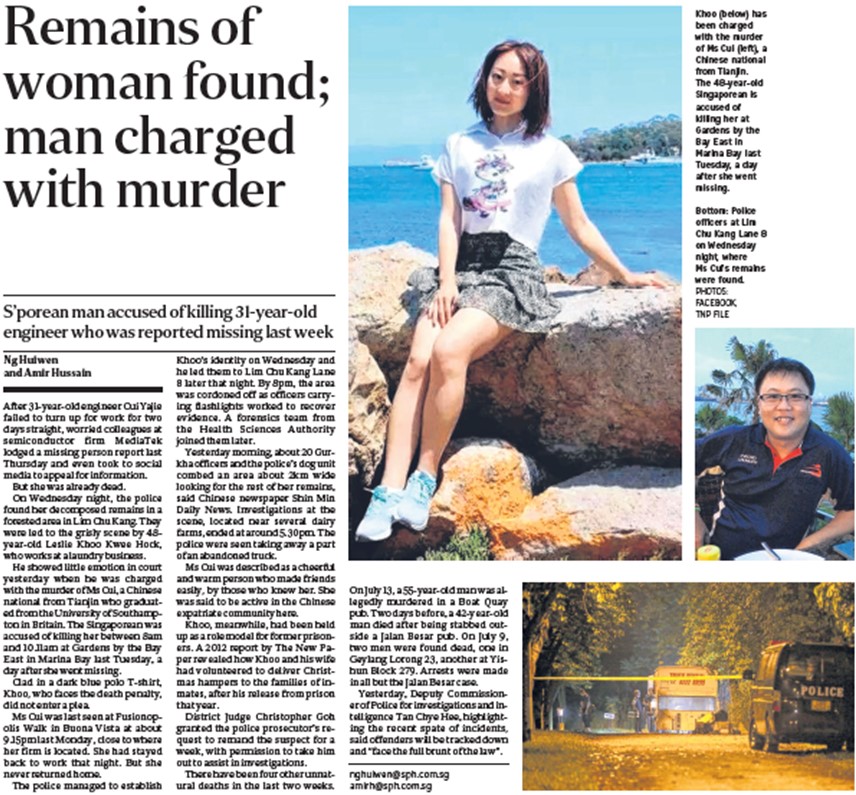 Too many lies to remember.

After carefully trawling through closed-circuit television (CCTV) footages from the MRT stations near her residence, officers discovered that Cui had alighted at Joo Koon MRT station and boarded a car with a license plate that was registered to Leslie Khoo Kwee Hock. As Khoo was the suspected last point of contact, he was interviewed for information about the missing woman. During the interview, Khoo denied knowing her whereabouts, stating that he last saw her at the Bay East Garden carpark of Gardens by the Bay. Khoo further shared that they had an argument about money he owed Cui in the car, after which he pushed her out and left. When the SIS officers brought Khoo to the location he claimed to have last seen her for further investigations, his statements were found to be incongruent, which prompted the SIS officers to probe further. After reviewing more CCTV footages, the officers noticed that Khoo appeared to be alone in the car when he drove into Marina Bay Gardens. His vehicle was processed by HSA’s Forensic Chemistry and Physics Laboratory, where traces of blood were found. After examining the blood, HSA discovered that the blood had matching deoxyribonucleic acid (DNA) - a molecule that contains the genetic code of organisms - with objects Cui had used at her home. Faced with mounting evidence, Khoo eventually admitted that he had killed her in a fit of rage.

The dead tell no tales.

Khoo told the officers that on the morning of 12 July 2016, Cui had threatened to go to his office, but she was persuaded to meet up with him first. A heated argument broke out between them in the car, forcing Khoo to stop along Marina Gardens Drive. He said that Cui became very physical, demanding that he return the SGD10,000 she had given him for an investment. In the heat of the argument, Khoo strangled her to death. Not knowing what to do, Khoo drove around with the victim’s lifeless body, carefully concealing her with clothes and reclined the seat to evade CCTVs and eyes of the public. Recalling a location during his National Service (NS) days which was remote and far away from human traffic, he brought the body to Lim Chu Kang Lane 8, where he attempted to burn it under a metal lorry canopy with charcoal and kerosene. When he realised that the body was taking a long time to burn, he shifted the body to a nearby drain to discreetly continue the burning process. After burning the body for three days, he collected the remains and ashes and scattered the ashes into the sea at Sembawang.

The first time Mitochondrial DNA Sequencing was used in Singapore.

When Khoo brought the SIS officers to the location where he burned the body, Crime Scene Specialists were also called down to process the scene. Even though there was no physical body, the team managed to collect traces of evidence, including a piece of burnt clothing and some human hair. After further examinations, the HSA’s Forensic Chemistry and Physics Laboratory managed to find a match of the piece of clothing with the same dress belonging to another customer, based on thread count and pattern. The matching clothing strongly suggested that the burnt clothing came from the dress belonging to the victim. However, the HSA’s DNA Profiling Laboratory team could not determine that the human hair was matched to the victim as it was missing the roots, which possessed crucial DNA. HSA then requested the Police to attain some hair strains from the victim’s mother to proceed with Mitochondrial DNA sequencing.

This was the first time Mitochondrial DNA sequencing was used to aid in an investigation in Singapore. Mitochondrial DNA is exclusively carried on the offspring from the mother, and a match between the victim’s mother’s hair and the hair sample would help uncover if the hair found at the scene belonged to the victim. The victim was also an only child, which helped the HSA’s DNA Profiling team establish that it was indeed Cui’s hair that was found at the crime scene. With this evidence, the Police were finally able to conclude and proceed with charging Khoo for the murder of Cui.

Khoo was convicted on the charge of Murder under Section 300(b), punishable under Section 302(2) of the Penal Code, Chapter 224, on 19 August 2019, and was sentenced to life imprisonment. This case saw officers trawling through more than 100 hours of CCTV footage, interviewing more than 60 witnesses and thoroughly examining more than 200 case exhibits. This case was really challenging, but through the use of forensic science and thorough investigative work, justice was served!