In this edition of Crime Files, we take a look at how an armed robbery turned out to be an orchestrated attempt to embezzle company funds. Read on to find out how our Investigation Officers (IO) from Ang Mo Kio Division worked tirelessly to bring the perpetrators to justice.

Just before mid-day on 3 March 2019, Lee Kah Yeow, a 48-year-old Manager with Kopitiam food court, reported to the Police that he was robbed at knife point in his management office at Rivervale Plaza. Lee reported that the robber was armed with a knife and had demanded that he emptied the contents of the safe deposit box into the robber’s bag. Lee did as he was told and filled up the bag with cash from the safe. Before fleeing, the armed robber directed Lee to put his head into the empty safe. As soon as Lee heard the door had closed behind him, he stood up and gave chase. 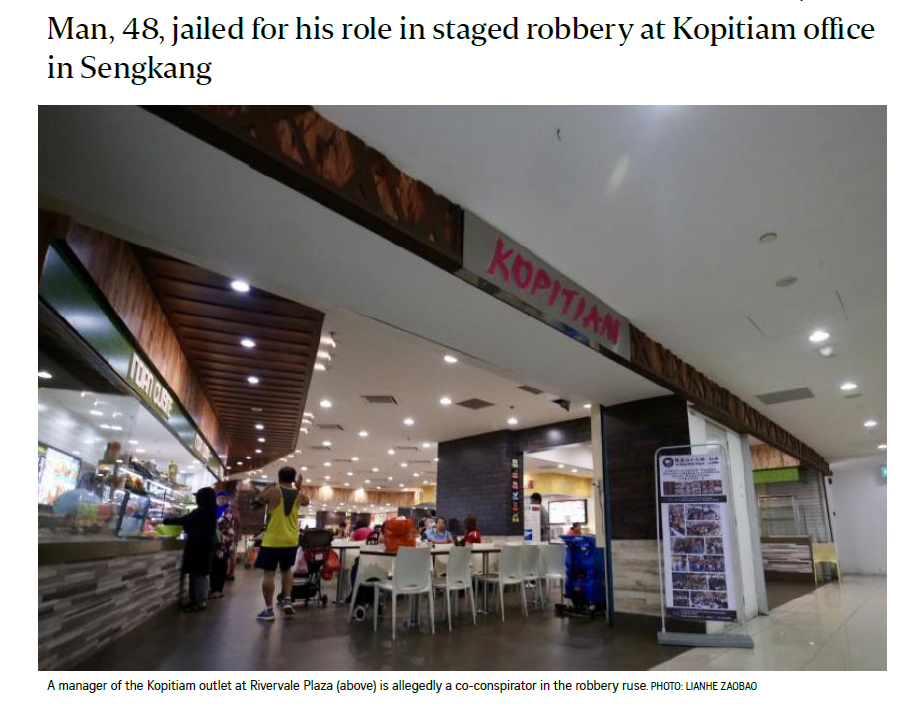 
Outside his office, Lee was approached by a Kopitiam staff who told him that he had seen a man behaving suspiciously before walking towards the direction of the food stalls. Both of them then proceeded to give chase but after a short chase down a flight of stairs, both men lost sight of the armed robber.

In the Police’s interview with Lee, the IOs noticed several suspicious calls and texts received on Lee’s mobile phone before and after the robbery. The IOs also found that Lee had shared his work address to the same number via text message. When probed further, Lee informed the IOs that his friend had contacted him on some investment opportunities. Acting on these suspicious calls and texts, the IOs found out that the number belonged to one, Tan Lye Meng. From their preliminary investigations, the IOs suspected that Lee may be involved in the armed robbery as well.

Through an interview with the company’s auditor, the IOs established that the money in the safe box amounted to $26,043.20. The auditor also informed the IOs that while Lee and him were reviewing the CCTV footage of the incident, Lee had remarked, “How come he never wear mask, so stupid.” The auditor said that he was surprised by the remark, but Lee dismissed it as just a joke. He further added that Lee had mentioned the Police might re-interview him as he had just paid off some bank loans. These revelations by the auditor further reinforced the IOs’ suspicion that there was more than met the eye.

With this crucial information, the IOs brought in Lee for further questioning. Lee continued to deny his involvement but when probed further on why he had texted his work address with the number found on his phone, Lee revealed that the text was for someone who was supposed to collect a sum of money from him. Lee told the IOs that he was to pay $1,000 to a man named “Duku” in exchange for horse-betting tips. Lee claimed that “Duku” was to arrange for someone to collect the money from him. “Duku” was later established to be Hoi Hoy Leong, a 51-year-old unemployed man.

With this new information, the IOs wasted no time and managed to trace the whereabouts of Hoi. During Hoi’s interview, he revealed that Lee had approached him to stage a robbery. Hoi rejected Lee and referred him to the would-be armed robber, Tan Lye Meng. Not wanting to be involved, Hoi distanced himself from the duo who went on to make plans for the offence.

On 7 March 2019, four days after the report was lodged, Tan was apprehended at his friend’s residential unit by the Police. Tan came clean when interviewed by the IOs and confessed to his role in the fake robbery ploy. Lee was arrested shortly after.

On 9 January 2020, Tan was sentenced to seven years and seven months imprisonment for the charge of Dishonestly Receiving Stolen Property under Section 411 of the Penal Code, Chapter 224 and other drug offences.

As Lee had made full restitution to the company, Lee was sentenced to 25 weeks in imprisonment for the charge of Criminal Breach of Trust as a Servant under Section 408 of the Penal Code, Chapter 224 on 17 January 2020.

Armed with a keen eye for details and shrewd investigative skills, the IOs worked tirelessly round the clock to establish the link between the different parties involved in the staged robbery. They kept the heat up on the leads and eventually brought the perpetrators to justice!