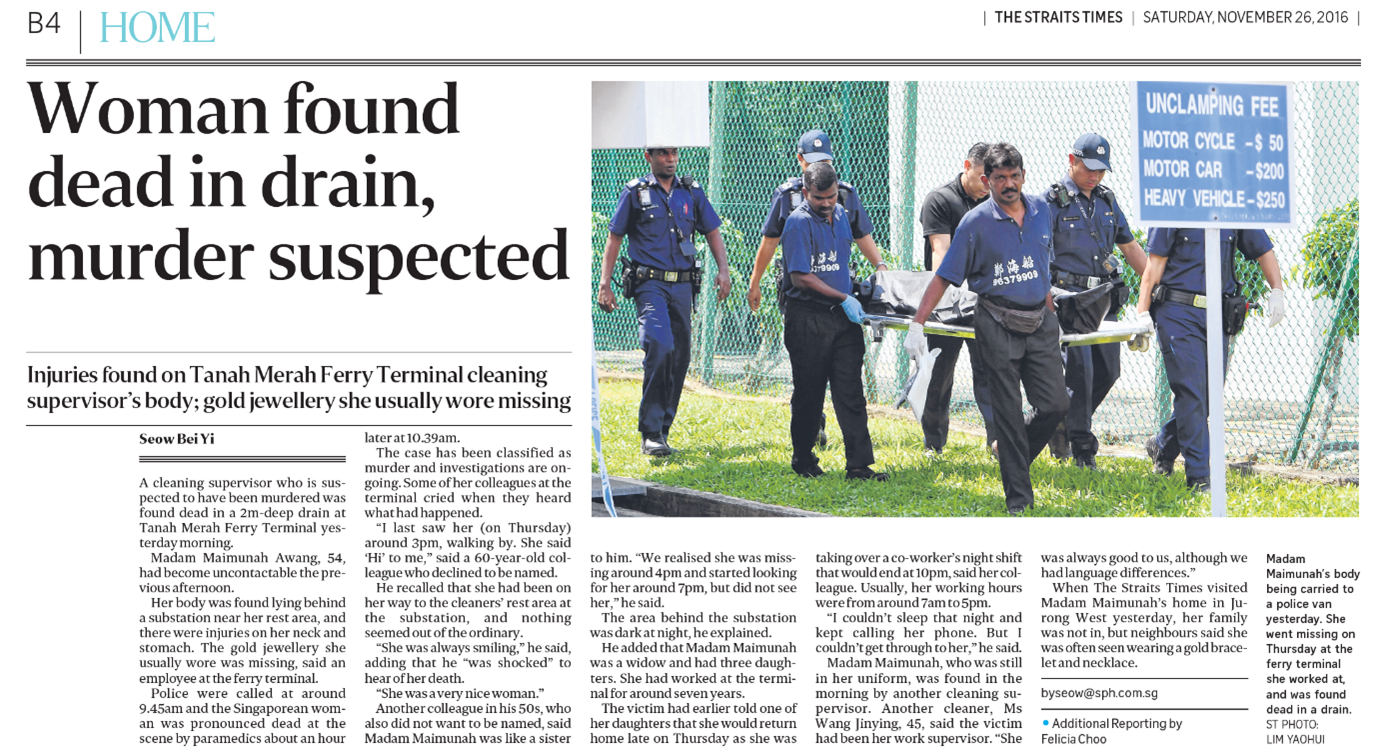 
In this edition of Crime Files, we find out how officers from the Criminal Investigation Department (CID) worked tirelessly round the clock with assistance from the Health Sciences Authority (HSA) and Royal Malaysia Police (RMP) to serve justice to the perpetrator involved in the Tanah Merah Ferry Terminal murder!

In the early morning of 25 November 2016, the Police received a call requesting for assistance involving a female body found in a drain at the Tanah Merah Ferry Terminal. The victim, Mdm Maimunah Binte Awang, a 54-year-old cleaning supervisor at the terminal, was found with multiple injuries on her neck, head, and body. Mdm Maimunah was pronounced dead by paramedics at the scene.


Putting Two and Two Together

Officers from CID's Special Investigation Section sprang into action and commenced investigations into the incident. The investigators found out that Mdm Maimunah’s daughter last saw her on 24 November 2016, and that the daughter had lodged a missing person report in the wee hours of 25 November 2016. Investigators also discovered that one of the cleaners had not reported to work. The cleaner was later identified as Ahmad Muin Bin Yacob, a 27-year-old Malaysian.

Preliminary investigations revealed that the cleaning company hired Ahmad Muin on 25 October 2016 on a temporary work permit. He was to report to Mdm Maimunah along with three other cleaners. Sometime in early November, Ahmad Muin was told that the company had to cut down the number of cleaners and had decided to terminate his work permit. As Ahmad Muin was due to get married in December, he pleaded with the company to retain him until he secured another job. Facing a job loss and struggling to finance his wedding, Ahmad Muin became desperate and resorted to borrowing money from his co-workers.

On 24 November 2016, at about noon, Ahmad Muin went to the cleaners' room and met Mdm Maimunah who was having her lunch. A dispute then broke out between both parties. In his anger, Ahmad Muin punched Mdm Maimunah in the face. He attempted to hit her again but was pushed back by Mdm Maimunah. Ahmad staggered back and saw a pair of grass cutters in a pail on the floor. He picked up the pair of cutters and thrusted the blade into Mdm Maimunah's upper right chest. As Mdm Maimunah slumped to the ground, Ahmad Muin struck her head with the cutters' handle repeatedly. He stopped only when he noticed blood flowing out of Mdm Maimunah's head, and that she was gasping for air. Ahmad Muin then removed four pieces of gold jewellery that Mdm Maimunah was wearing and proceeded to push her body into a nearby drain. He had removed a drain cover, placed the body in the drain and replaced the drain cover in an attempt to prevent the body from being discovered. Ahmad Muin then fled the scene with Mdm Maimunah's mobile phone as well.

With overwhelming evidence stacked against him, Ahmad Muin broke down and admitted to investigators his involvement in Mdm Maimunah's death. He also revealed that he had pawned all of Mdm Maimunah's jewellery in Malaysia for a total of RM8500 to fund his marriage and his gambling habits.

On 4 November 2020, Ahmad Muin was convicted of murder and sentenced to life imprisonment and 18 strokes of the cane. Throughout the investigation, officers from the CID worked tirelessly round the clock to trawl through more than 100 hours of Closed-Circuit Television footage, interviewed more than 60 witnesses and processed more than 150 pieces of evidence gathered from the crime scene to ascertain the identity of the suspect. Close cooperation with forensics experts from the HSA and RMP officers were also instrumental in bringing the accused to justice.