In this issue of Crime Files, Police Life shines the spotlight on a case of Police Impersonation scam that was coordinated beyond Singapore’s shores, and how the suspects were nabbed before they could flee the country. 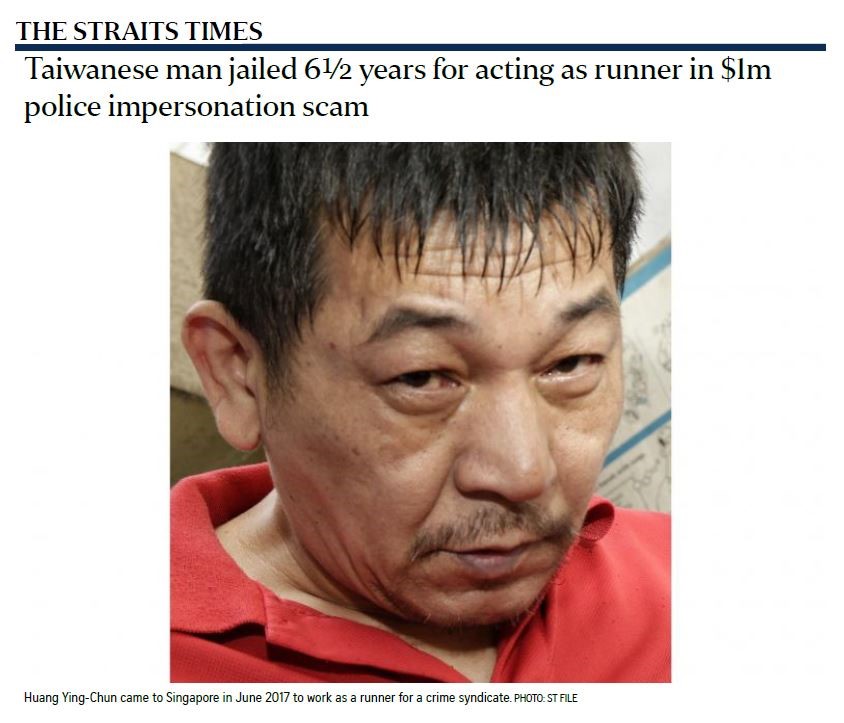 The Imposters Among Us

It is common knowledge that scammers often use all kinds of psychological means to emotionally manipulate their victims into falling for their scams. And one of such scams involved the scammers impersonating as the Police and ‘scaring’ their victims into providing their bank account details and one-time passwords for “investigations” into alleged money laundering offences.

One of the victims, a 55-year-old woman, reported losing almost S$225,000 to such a scam. Getting the victim to cooperate was no easy task, as the scammers were skilled at convincing victims that they were the real deal, and anyone else claiming to be the Police was a fraud.

“The scammers came up with a well-thought out cover story for their operations,” said Inspector (Insp) Jeffrey Low, an Investigation Officer from the Technology Crime Investigation Branch, Criminal Investigation Department. “Even going to the extent of printing out forged documents, such as warrant cards, police reports and warrants of arrest, to completely dupe the victims and gain their trust.”

Because of the convenience of online banking and the ease of transferring funds instantly, the scammers were also able to quickly transfer the monies they had cheated through various victims’ accounts. Some of the monies were subsequently acquired by them in person from their victims, deceiving them into believing that they were handing over evidence to the Police and assisting them in their “investigations”.

“The victims usually only realised they had been scammed after a few days,” Insp Low explained. “In that time, the money would have changed hands so many times before being siphoned off through various means, which made it very challenging to track down the suspects.” Insp Low and his team were undoubtedly racing against the clock.

Tracking Down the Suspects

Upon learning about the means the scammers were using to move their ill-gotten gains, Insp Low immediately contacted the local banks for assistance.

“We quickly asked the banks for information pertaining to the various transfers and also requested for them to stop the transfers, halting the scammers in their tracks,” Insp Low shared. Owing to the strong partnership between the Police and Singapore’s local banks, some of the monies were eventually recovered before they fell into the scammers’ hands.

From there, Insp Low contacted one of the victims, an elderly man who was duped into thinking that he was supposed to meet the “Police” to hand over laundered money. With the victim’s cooperation, Insp Low and his team mounted an operation to catch the scammer red-handed.

The operation was a success with Insp Low and his team apprehending the scammer when he appeared to meet the victim. Upon further investigation, Insp Low found out that the scammer, a Taiwanese national named Huang Ying Chun, was working with several others, but stubbornly refused to spill the beans on their whereabouts.

As Huang refused to cooperate, Insp Low worked with Immigration & Checkpoints Authority officers to conduct further checks to determine his accomplices. Two other Taiwanese men, Chen Peng Yu and Chen You Jeng, suspected to be working with Huang were later identified. To prevent the two suspects from fleeing the country, Insp Low immediately issued a Police Gazette for their arrest.

“Though Huang and the other two did not directly interact with each other at the airport, my gut feeling was that they were in cahoots based on our observation of their behaviour in the footage,” Insp Low shared. Sure enough, Chen Peng Yu was caught trying to leave the country, but remained tight-lipped when caught, just like his partner Huang.

By this time, however, Insp Low and his team already had enough leads to track down Chen You Jeng and headed to the hotel to arrest Chen. Another Taiwanese male suspect, Tsieh Teng-Chia, the final member of this four men syndicate from Taiwan, was arrested along with Chen at the hotel. For their crimes, Tsieh Teng-Chia, Chen You Jeng, Chen Peng Yu and Huang Yin Chun were convicted and subsequently sentenced to imprisonment of two years and nine months, three years, four years and 10 months, and five and half years respectively.

A Dime in a Dozen

Even though Insp Low and his team were successful in busting this scam syndicate, he warned that we should not let our guards down and we need to continue to be vigilant against such scams as there will be other scammers out there using other creative means to dupe their victims.

“Though I am proud to have been able to crack this case and prevent more victims from getting scammed, I am also aware that there will be criminals out there who may become attuned to our response and become smarter,” Insp Low commented.

“Hence, no matter what challenges the future may hold and how criminals operate in the future, the Police will always continue to innovate and adopt new ways of dealing with cybercrime.”

Indeed, this case serves as a stark reminder that technological advancements, which improve our quality of life, may also be exploited by criminals to partake in transnational criminal activities. The Singapore Police Force must remain steadfast in its mission to keep Singapore the safest city in the world!