The Police have arrested seven men and one woman, aged between 17 and 33, for their suspected involvement in facilitating the conduct of DBS phishing scams.

Between 5 and 8 June 2022, Police received reports that more than 60 victims had fallen prey to DBS phishing scams amounting to a total loss of more than $60,000. These victims had received unsolicited SMSes with tags like “SG-DBS” or “DBS-Notice”, which stated that their card had been blocked due to unusual activities, or that their bank account had been frozen due to suspicious activities. The SMS then directed victims to sign in via an embedded link to verify their identity.

This link redirected victims to a spoofed Internet banking log-in page, where victims would be asked to key in their online banking username and password, and bank card details. After entering the spoofed website, victims would be redirected to another spoofed web page, which would request for them to key in the One-Time Passwords (OTP) received on their mobile phones. This compromised their accounts and allowed scammers to siphon off funds, with victims finding out only later that they had fallen prey to the scam.

Through follow-up investigations and close collaboration with DBS Bank, officers from the Commercial Affairs Department established the beneficiaries of the siphoned-off funds and arrested them in an island-wide operation on 8 June 2022.

The eight persons are being investigated for the offences of cheating or money laundering. The offence of cheating under Section 420 of the Penal Code 1871 carries an imprisonment term of up to 10 years and a fine. The offence of money laundering under the Corruption, Drug Trafficking and Other Serious Crimes (Confiscation of Benefits) Act 1992 carries an imprisonment term not exceeding 10 years, a fine not exceeding $500,000, or both.

The Police take a serious stance against any person who may be involved in scams, and perpetrators will be dealt with in accordance with the law. To avoid being an accomplice to crimes, members of the public should always reject requests by others to use your bank account or mobile lines as you will be held accountable if these are linked to crimes. 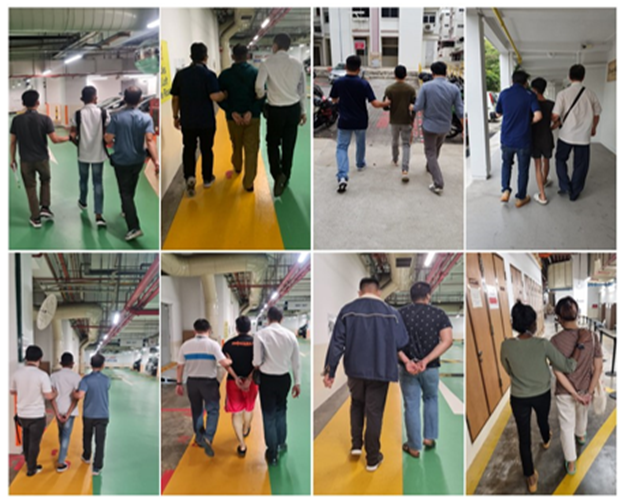