In light of the COVID-19 outbreak, more than 3,000 Singapore Police Force (SPF) officers have been deployed to support the nation’s battle against the COVID-19 virus. To further enhance the SPF’s operational effectiveness, the SPF has also leveraged technology through the deployment of autonomous police robots and Unmanned Aerial Vehicles (UAVs) at the migrant worker dormitories – gazetted as isolation facilities – to augment police operations. Robots on the Ground

With their ability to patrol and navigate routes without supervision, two Multi-purpose All Terrain Autonomous Robot (M.A.T.A.R.) 3.0 units have been deployed at Changi Lodge 2 Dormitory and Toh Guan Dormitory to complement police officers on the ground as they conduct foot patrols and project police presence at the isolation facilities. As these robots are able to perform automated routine tasks, they are able to help patrol an area, minimise the need for officers to come into close contact with the dormitory residents, and thereby lowering the risk of infection. Moreover, the M.A.T.A.R. also keeps the dormitories safe by helping to ensure safe distancing within the premises.

The functions of M.A.T.A.R. 3.0 have surpassed that of its predecessors. Working closely with research institutes and industry partners, the SPF and the Home Team Science and Technology Agency conducted iterative trials and reviews to develop the first generation M.A.T.A.R. to M.A.T.A.R. 2.0 and subsequently enhancing it further to become M.A.T.A.R. 3.0. The current version comes in two variants, each with its own set of unique gadgets. One variant has a Pan-Tilt-Zoom Camera, which can be raised up to two metres to provide 360-degree surveillance coverage. The video feed captured by the camera can then be live-streamed to the police command centres on the ground or to the Police Operations Command Centre (POCC) at the Police Headquarters, providing real-time footage from the frontlines to assist in sense-making. There is also a two-way communication feature on the robot that allows officers on the ground to communicate with officers in the command centres. This communication feature has also been used to remind the migrant workers at the dormitories to adhere to safe distancing measures. The other variant of M.A.T.A.R 3.0 spots a tethered Unmanned Aerial Vehicle (UAV) which can soar up to 30 metres, providing enhanced aerial surveillance of the surrounding area. Like the Pan-Tilt-Zoom Camera, the UAV can transmit a video live-feed direct to the command centres, which proved to be very useful in assisting SPF officers involved in the dormitory operations. 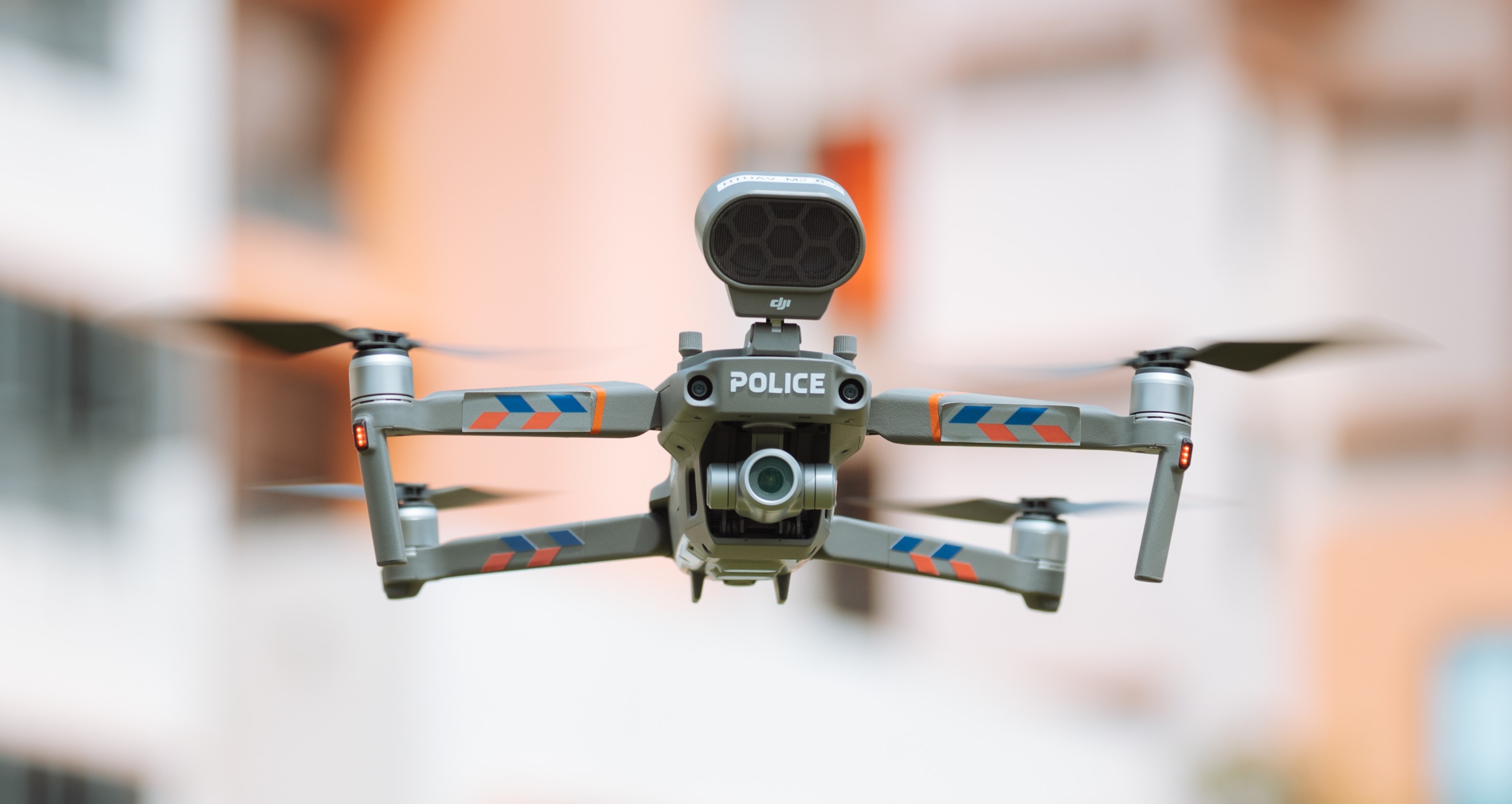 Eyes in the Sky

In addition to the patrol robots, the SPF has also deployed UAVs, operated by certified SPF UAV pilots, to support the dormitory operations at the Kranji Lodge Dormitory and Cassia@Penjuru Dormitory as a form of contactless patrol, and to reduce the frequency of police patrols on site. The UAVs are used to conduct aerial surveillance of the perimeter surrounding these dormitories. Having ‘eyes in the sky’ allows the SPF officers to detect any anomalies within the compound, such as crowd gathering or trespassing, and also enables them to coordinate their responses to better manage such situations. “Our responsibilities are to support the in-situ officers in the dormitories by complementing their patrol with aerial surveillance,” said Station Inspector Jason Quek, a UAV pilot. “During the UAV patrol, we are able to remind the foreign workers, through the UAV’s loudspeakers, not to congregate at the open area and wear their masks at all time.”

Since its first deployment in 2016, the SPF’s UAVs have undergone continual improvements to ensure that they are enhanced with the latest UAV technologies to meet the challenges of SPF’s operational landscape. The Sky Aerial Response Command (SkyARC), which was unveiled during the Police Workplan Seminar 2019, was part of such developments. The SkyARC, which was also deployed for the dormitory operations, is equipped with an arsenal of UAVs capable of advanced aerial surveillance on different terrains and acts as a mobile UAV response force. The footage and images captured remotely by these UAVs can be live-streamed to the police command centres, enabling better sense-making and enhanced operational responses to be made. As technology continues to evolve, the SPF must constantly adapt to ensure the relevancy and effectiveness of its capabilities. Currently, the Home Team (HT) UAV Unit is working with specialist units, such as the Criminal Investigation Department and Traffic Police, to develop 3D scanning tools in UAVs for scene reconstruction, and to embrace artificial intelligence that utilises UAV footage for video analytics. SPF UAV pilots from the various land divisions and specialist units, are also concurrently trained to grow the SPF’s own organic ground forces for future UAV deployments. Beyond these ongoing developments, the SPF remains committed to working with its partners to develop more technologies to better augment police operations.